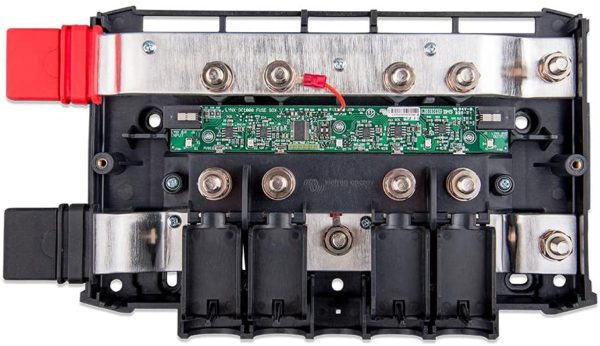 The Lynx Distributor, Lynx Shunt VE.Can and the Lynx Power In are rated for a nominal current of 1000A, for 12, 24 or 48 system voltages. The Lynx VE.Can has a space for a main fuse. This space has been designed to fit a CNN fuse. A 325A/80V fuse is available from Current Connected or use another CNN fuse by Littlefuse. Although the distance between the fuse mounting bolts is designed for a CNN fuse, it might also be possible to fit other fuse types in this space. The fuse mounting bolts are M8 and their centers are 63mm apart.

Distributor fuses are not included and sold separately, here: https://www.currentconnected.com/product/mega/

Why Fuse The Bus

Batteries are special. They are both a source and destination of energy.

Power can flow from them to a load (or a fault). It can also flow to them from a charge source (eg other batteries or solar).

It is important that in cases where batteries are combined, and there is the opportunity for current to flow from one connection to another in fault, that there is sufficient and robust circuit protection.

For example, the BigBattery Owl Packs

In this case the 12 volt packs are each protected by individual 300A fuses and also protected by a 175A BMS in the battery.

These modules are then connected through the Lynx Distributor, and those main battery take off wires are connected at the Bus end by another 125A MEGA fuse.

Both the 175A fuse and the 125A fuse are as close as possible to their respective sources of current. The battery cells, where the internal wire is protected inside the cabinet. And the shared bus bar (where current can flow from other batteries or a charge source).

This means that if there is a short circuit fault somewhere along the battery module take off cable, there is sufficient protection.

Without the 125A bus bar MEGA fuse. There is the possibility of the battery take off cables fault that the 125A cabinet circuit breaker trips, but that the fault is continued by the supply of the other batteries (up to their combined 375A) and this exceeds the current rating of the cable to the fault and starts a fire.

This is an unlikely scenario, but consequences of a fire in an energy storage situation are so serious that it is a recommended level of protection.

Q – There is a small 4-pin cable shipped with the Distributor – I can only assume that the cable interconnects between the Shunt and Distributor?

A – Yes, but this has only to power the LEDs on the distributor, there is no other function for this at the moment.

Q – The Distributor has a DIP switch. What are the settings?

A – That’s for manual settings, please don’t touch as the system will auto configure (up to 32 battery’s )

Q – The Distributor has a 6-pin header block. What is it for?

A – In the future, the read out of fuses, but this is not supported yet.

There are no reviews yet. 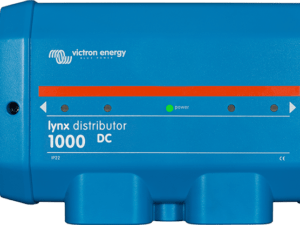